Something amazing is coming from Nigerian legend, Onyeka Onwenu.

Feminist icon, and multi-generational talent Onyeka Onwenu has announced plans for the adaptation of her best-selling memoir “My Father’s Daughter” into an exciting mini-TV series that would feature some of Nollywood crème de la crème. 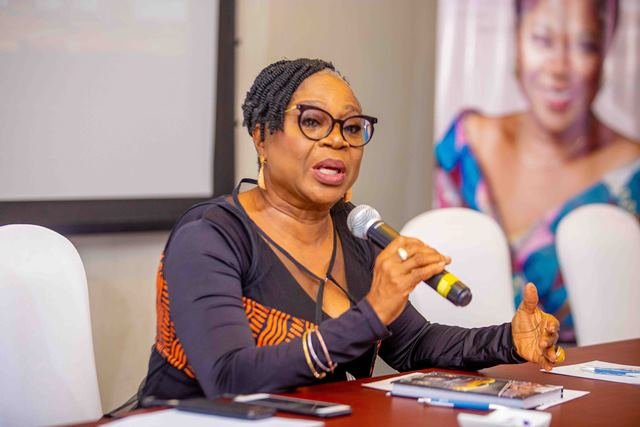 Onwenu, who recently turned 70, made the announcement at a media parley held at Four Points Sheraton in Lagos on Friday, January 28, 2022. The event was graced by dignitaries from all walks of life including Sonny Allison, Prof Bankole Shodipo, Chief Edwin Igbokwe, Teco Benson, and Betty Mbadiwe Ijeoma.

“We have not decided if it would be in six or eight parts, but I can confirm it would not be just one,” said Onwenu. “What we are doing here is to tell the story of Nigeria, and the story of the film and music industry. It is our time to tell our stories ourselves.”

My Father’s Daughter, published in 2020, is a living archive of Onwenu’s journey through life as a young child enveloped in her father’s love and a woman that faced insurmountable odds and broke glass ceilings to actualize her destiny. The memoir is a brutal and honest retelling of her highs, lows, despair, hopes, and vision– and Nigeria’s too.

The much-anticipated TV series would focus on Onwenu’s life and career as told in the memoir and provide an opportunity for younger Nigerians to learn about the country’s history. Onyeka Onwenu and Charles Uwakaneme serve as the Executive Producers for the project while Izu Ojukwu will be Director known for his previous works “Amina” and “76″ and Chichi Nworah known for her previous works “Shanty Town” and “Omoge Suzzy” will be the Producer of the series.

Although the timeline for the release of the movie was not disclosed, the team hinted that some of Nollywood’s finest including veteran Richard Mofe-Damijo, renowned actress Nse Ikpe Etim and Onwenu herself would be on-screen, alongside other names. US-based Investors Capital LLC was also announced as the partner on the TV series project.

“I look forward to the book being made into a TV series,” said Ngozi Osu, the editor of the memoir, “The book talks a lot about women. Onyeka reveres, promotes, respects, mentors, and motivates a lot of young girls.”

What you may not know about Onyeka Onwenu

During her time at the Nigerian Television Authority (NTA) in the 1980s and 1990s, Onwenu put the spotlight on topical national issues including widespread corruption in the country, environmental degradation in oil-rich areas, and the need for tolerance and unity across ethnicities and religious inclinations in Nigeria. Her songs “One love” and “Iyo gogo” have proven to be evergreen, especially the former given the current social and political realities.

Onwenu was dedicated in service of the Nigerian public as the former Executive Director/Chief Executive Officer of National Centre for Women Development, and Chairperson of Imo State Council for Arts and Culture, earning the praise of President Muhammadu Buhari on her 70th birthday “for the fresh ideas and institutional reforms she brought into public service, passionately creating and pursuing a vision for a better life for many.”

Got Leftovers? Check Out this Easy Breakfast Recipe from Zeelicious Foods

Chick Chat With Cornelia O’Dwyer: How Many People Truly Enjoy Their Wedding Day?

“There’s Something Wrong with the Bamideles”! – It Takes 2 Minutes to Watch the Exciting Trailer for Diane Russet’s New Film

Ever Had to Break Up with A Friend? Let Bisola Aiyeola & Her Guests Break Down Friendship Breakups!

Entertainment, News, This Month In TW

From Selling Bread & Cakes to His Big Break! Here Are 5 Things You Didn’t Know About Deyemi Okanlawon