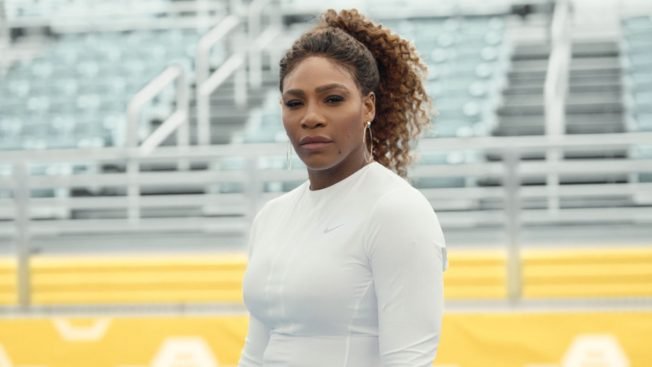 Bumble has unveiled its full 30-second Super Bowl spot starring Serena Williams for its “The Ball Is In Her Court” campaign. The ad will air during the first quarter of the Big Game.

This ad is the first with Bumble’s new global advisor, Williams, who doubles as co-creative director on the campaign that celebrates women making the first moves in their careers and lives. It also marks the five-year-old company’s first Super Bowl appearance.

In the spot (below), Williams urges women not to wait for good things to happen, but to make them happen. Had she waited on the stars to magically align in her own life, the ad argues, she may not have become the role model, celebrity, pro tennis star and fashion designer she is today.

“At such a pivotal time for women across the globe, this commercial seeks to inspire all of us to seize opportunity wherever it presents itself,” Williams said in a statement. “I want women to feel empowered to find their voice and use the power within to create change, to lift each other up, and to never let the world tell us we can’t—because we can, and we will.”

According to the release, the spot was created by a predominantly female team at Nashville marketing agency FlyteVu and WPP’s VMLY&R (formed through the recent merger of VML and Y&R), with Little Minx of Santa Monica handling production. A.V. Rockwell, a screenwriter and director from Queens, N.Y., directed the ad. Her work addresses such issues as race and systematic oppression and has garnered awards including a Clio for The Gospel, a short film she directed for singer/songwriter Alicia Keys.

Bumble chief brand officer Alexandra Williamson told Adweek in an earlier interview that the brand aimed to focus not just on one aspect of Williams’ life, like her tennis career, but on everything she does as an athlete, entrepreneur, mother, friend and wife.

“She has built the life she wants to live; a life that transcends the court,” Williamson said. “People will see a different side to Serena when this ad goes live, and I would attribute that to an all-female team working on it.”

An ad directed and created by a team of women is all the more critical to bring to the male-dominated platform that is the Super Bowl.

“If you seek to create drastic change, you must often take a drastic step,” Bumble CEO and founder Whitney Wolfe Herd added in a statement. “By disseminating our message to the masses in this way, we are aiming to leverage this cultural moment widely considered to be male dominated and flip the narrative to show that no matter the playing field, we are here, and we will be heard.”

Founded in 2014, Bumble is a self-described social networking app most commonly used for dating purposes that has women make the first move. As part of its “The Ball Is In Her Court” campaign, Bumble has designated Feb. 4, the day after the Big Game, as “First Move Monday.” From Feb. 4 through Feb. 8, for every first move made on Bumble, the company said it will donate an unspecified amount to Yetunde Price Resource Center, the charity chosen by Williams that helps communities affected by violence.

A Dubai Just For You! Dive into Amaka & Jennifer’s Luxurious Dubai Vacation in Our Special Tourism Issue

Women in film: ‘We’re living in the dark ages when it comes to representation

For the First Time, 3 Moms Make it to the Quarterfinals at U.S Open Grand Slam!

BRAIDS: COLOR ME BEAUTIFUL – A Rehash