“The Ghost and the House of Truth”, a film by Temple Productions, in association with Slate 1 Films and The Mission Entertainment, is set to premiere at the Urbanworld Film Festival 2019, Friday, September 20th, 2019 at the AMC Empire – Theater12, New York. 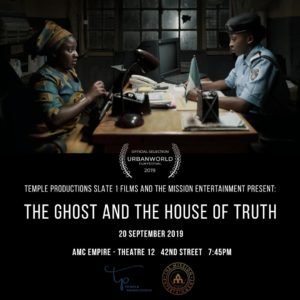 The 23-year old annual Film Festival is one of the largest internationally competitive festivals of its kind, showcasing a selection of films representing the broadest lens of diversity across stories, characters, themes, and cultures. The festival has showcased works by internationally acclaimed directors and producers.

Among the festival’s 78 selections, the movie “The Ghost and the House of Truth” will hold audiences spellbound with its moving story, spotlighting salient socio-cultural and gender issues that are relatable to people of color, globally.

“The Ghost and the House of Truth” would be the sixth movie from the stables of the Temple Productions and the second collaborative work with Director Akin Omotoso and Producer Ego Boyo. Their focus is to make films that provoke inquiry into topical social issues that affect and shape the experience of the average person in our society. Providing an avenue for reflection, dialogue, and solutions that meet the needs of our time.

All films and ticket sales are featured on Urbanworld.org.

For a list of theatres, tickets purchase and movie trailers, visit http://templeproduction.net/theghostofthehouseoftruth.

2Face Idibia Introduces His New Born Girl To The World, Names Her Olivia

Temple Productions is a Nigerian Media Productions company known for its critically acclaimed feature films and documentaries which reflect originality from its storytelling techniques to its exceptional, high-quality productions.

It Happened To Me: Falling For Two Cousins

Premiere of ‘Kasanova’ the movie