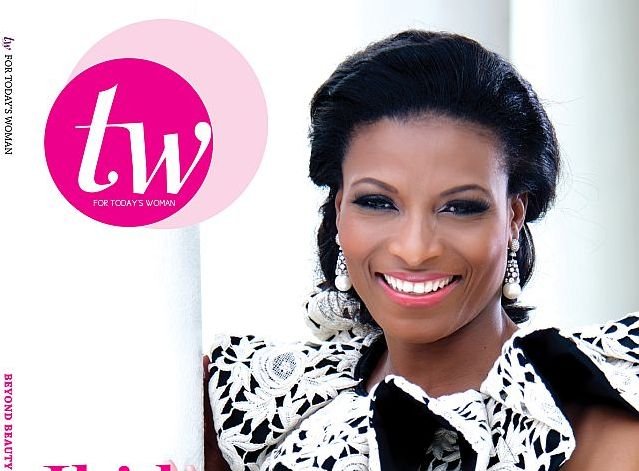 “If God is not going to do it, let it be left undone” – these words were spoken by the late Ibidunni Ighodalo’s husband, Pastor Ituah Ighodalo. And even though those words were not hers, it almost seems like they formed the theme for Ibidunni’s life.

From refusing to accept the immoral terrain that sometimes comes with being a Beauty Queen, to enjoying her turbulent yet unique path to marriage and motherhood, Ibidunni, who sadly passed away on the 14th of June 2020, and her walk with God was indeed spectacular to watch. And little did we know, that we once had front row seats to what we now see is a blueprint for an exemplary life.

TW Magazine NG featured Ibidunni Ighodalo on our April/May 2012 cover. In it, we spoke to her about her life’s journey – becoming the very first winner of the Miss Lux pageant; loosing her father at the age of 16; meeting the love of her life, Pastor Ituah Ighodalo; becoming acquainted with the unspoken rules of engagement between a Pastor and his Beauty Queen bride, and how all of that would lay the backdrop for the woman we have all come to know and love even in death.

Here are some excerpts from her interview in 2012;

A Different Type of Beauty Queen

Becoming a teenage beauty queen catapulted Ibidun, who was raised in Ibadan, into the spotlight, and the new-found fame brought both soaring highs and devastating lows. On the one hand, winning the Miss Lux title enabled her to contribute to the family finances at a time when things were difficult. Her father had passed away when she was just 16 years old and it fell to her to help provide for her mother and two younger brothers. She recalls, “I earned 50,000 Naira every month (for being the face of Miss Lux). I saved some and I gave some to my brothers to pay school fees and I also sorted my school out. I thank God it was a window that sorted out that
particular phase of my life. As a matter of fact I’m sure that the competition was made and created for me by God for that period.”

Still, the recognition she achieved proved to be a double-edged sword as some unscrupulous male pageant officials attempted to prey on her, often expecting sexual favours in return for the prizes that had been promised to her. It is indeed a testament to her staunch faith that she never gave into these temptations. She admits, “If you’re not careful the attention from men can derail you. And then if you don’t have a strong character or personality it can easily get into your head and you lose it and you become arrogant.“

As Ibidun starts to speak of the love of her life, her husband, Pastor Ituah Ighodalo her voice takes on a soft, girlish tone and the happiness radiating from her is palpable. She practically gushes: “he’s so peaceful, so calm. He’s an amazing man. I can’t believe that my marriage is so happy, he’s so sweet to me.”

But they have had to pay an extremely high price for this amazing love affair. When the couple first met, Ituah Ighodalo, who is 19 years Ibidun’s senior, was the Senior Pastor of a prominent parish of the Redeemed Christian Church of God. He was well respected and destined for great things within the church hierarchy. At that point he had been divorced from his first wife for four years and had no children. Despite the fact that he had been under pressure to re-marry, some members of the church railed against his relationship with Ibidun whom they perceived to be a “worldy” woman.

Of her detractors Ibidun says, “They had this image in their heads because she’s an ex beauty queen she is the wrong person for a pastor… I faced a lot of people from that angle. It was difficult – how many people do you want to tell that you didn’t wear a swimming suit and that you didn’t sleep around?”

And the harassment didn’t stop there. Ibidun was harangued by jealous female church members who besieged her with threatening anonymous phone calls and text messages. To make matters worse, the leadership of the church later began to agitate against their relationship, although strangely enough, the gauntlet was not thrown down until the couple had been married for a couple of years. Despite both Ibidun and Pastor Ituah’s many attempts to placate the leadership, officials ultimately demanded that he choose between the woman he loved and his beloved congregation.

Romantic love and God’s direction won out in the end and Pastor Ituah made the difficult decision to leave the Redeemed Church. He later went on to found his own thriving ministry which he christened, “Trinity House”.
When Ibidun speaks of this particularly difficult era of her life her voice takes on a stoic tone that speaks volumes of her firm belief in God and the strength of her character. “When you meet the man that God has created for you, the minute he walks through that door you would know, especially if you have a connection with God. And you have a discerning spirit. Everything works like that (snaps her fingers),” she says emphatically.

When asked how she knew for sure that this was the man for her, she replies, “I looked at him and I could see my life with him. And I knew that he was somebody that would nurture me.”

As Ibidun sits chatting with TW editor-in-chief, Adesuwa Onyenokwe, whom she affectionately refers to as “aunty”, her neat frame comfortably ensconced in a high back ornate chair, I detect no trace of bitterness or anger in her voice. For a woman who has been smeared unfairly due largely to something she has little control over –her physical appearance – what is most admirable is her ability to forgive and understand her tormentors. Mahatma Gandhi famously admonished that we “hate the
sin, love the sinner” and it seems she has found a way to do just that. She rationalizes, “In every human being there’s a tinge of envy and jealousy. If you walk into a room and you just bought a car and you announce to somebody ‘oh I just got a car’ they’ll be happy for you but in their minds they might be like, ‘oh I wish I was the one.’ It doesn’t necessarily mean that the envy is bad but it’s just wanting to be in that person’s shoes.”

The one thing this preacher’s wife credits as being her anchor through thick and thin is her unwavering faith in God. And even as she continues to face personal challenges her faith remains a constant shield against the vagaries of life. Ibidun committed to Christianity when she was just 14 years old. Back then, her schoolmates cruelly taunted her with jibes of “mammy water” (mermaid) due to her very long hair and fair complexion. One afternoon she was walking back from her classes when she heard singing and fellowship, and on the spot she decided that as she had no friends, Christ would be her friend. She reminisces, “I found Christ and everything fell into place.” She hasn’t looked back since.

It has been a source of whispers and thinly-veiled jeers that after six years of marriage Ibidun has not yet had a child. The same people who castigated her relationship with Pastor Ighodalo now take it as a sign of their vindication that the couple has been unable to produce a “fruit of the womb.” In some ways Ibidun’s plight is perhaps more painful for her as she reveals that she was a virgin at the time of her marriage as she had made God a promise to God as a teenager that if he saw her through the
troubled times she was experiencing at the time, she would protect her virginity until she met the man he had ordained as her husband. When asked if she’s vented her frustrations at God for not providing her with a much longed for child after she was so careful in preserving her purity before marriage, she confesses, “At one point my prayer was in that direction but with time and with maturing in my relationship with
God I began to see things differently. There is a time and season for everything. The way God has been with me and my husband, the amazing things he has done in our lives, I know that eventually we will have children. It’s just a matter of time.“

We confront her with the worst-case scenario, asking pointedly: “what if you end up never having a child?” Her reply is swift and resolute: “Sincerely if God is not going to do it, let it be left undone. I will move on with my life, serve Him till the end, love my husband and be happy.”

So for this small town girl turned beauty queen turned pastor’s wife has there been a Cinderella like happy ending? Her lavish yet comfortable Ikoyi mansion exudes wealth and sophistication and she herself represents an elusive ideal. But above all that there is a sense that a light that was previously hidden behind a bushel is now shining brighter than a supernova. Supremely confident in herself yet soft spoken and without a trace of arrogance, Ibidun is a woman in her element. Her confidence and self-possession are in no small part down to her happy marriage, which she describes as the cornerstone of her world. “Every day when I wake up, I pray God gives me long life and God gives Ituah long life. I’m serious, I can’t live without him. I can’t, my whole life is centered around him.”

But beyond that there also exists a hard won wisdom and a view of life borne out of a succession of challenging situations. She astutely observes in her native Yoruba that “Ewa ti ko ni wa on se ewa” which is loosely translated as “beauty without character is not beauty.” For someone who could easily get by on scarcely more than her God-given natural beauty, it’s commendable that she chooses to dwell on a different virtue– character – as the gold standard of a person’s worth. She describes character as “who you are when nobody sees you.” Besides character development, her other
passion is to be a role model for young girls and to show them that “a deep and honest personal relationship with God in your life will make your life worthwhile. The minute your commit your ways and you forget everybody else around you God will direct everything that concerns you.”

“All that glitters is not gold” is an oft-repeated saying but Ibidun Ighodalo puts paid to that clichéd notion. With her golden looks, heart of gold and gilded faith she is a rare gem through and through.

Women We Love: The ‘Queen of Talk’ – Joyce Daniels