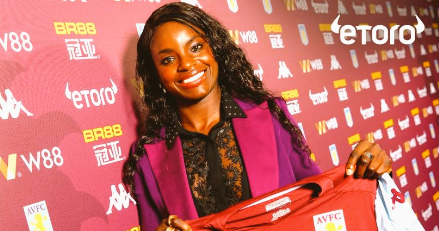 Eniola Aluko is celebrating her win and we are celebrating right along with her. She has been announced as Aston Villa’s new Sporting Director and we are thrilled.

Eniola, who is a broadcaster, lawyer, author and former footballer for Chelsea FC Women, Juventus FC and England, shared the great news via Twitter handle. And the official Aston Villa followed suite.

This is such great news for Eniola Aluko, and one of many great steps for women occupying more leadership roles.

#Chick Chat With Connie Girl: Friends Who Are Not Happy For You

We Owe Fade Ogunro for these Major Tips On How to Network at Events!

What Are Knot Pillows Used For? Let Us be Your Guide!

First Bank’s Corporate Statement on their New Board Constitution

Have You Heard About Yemi Alade’s New Ambassadorship Deal?